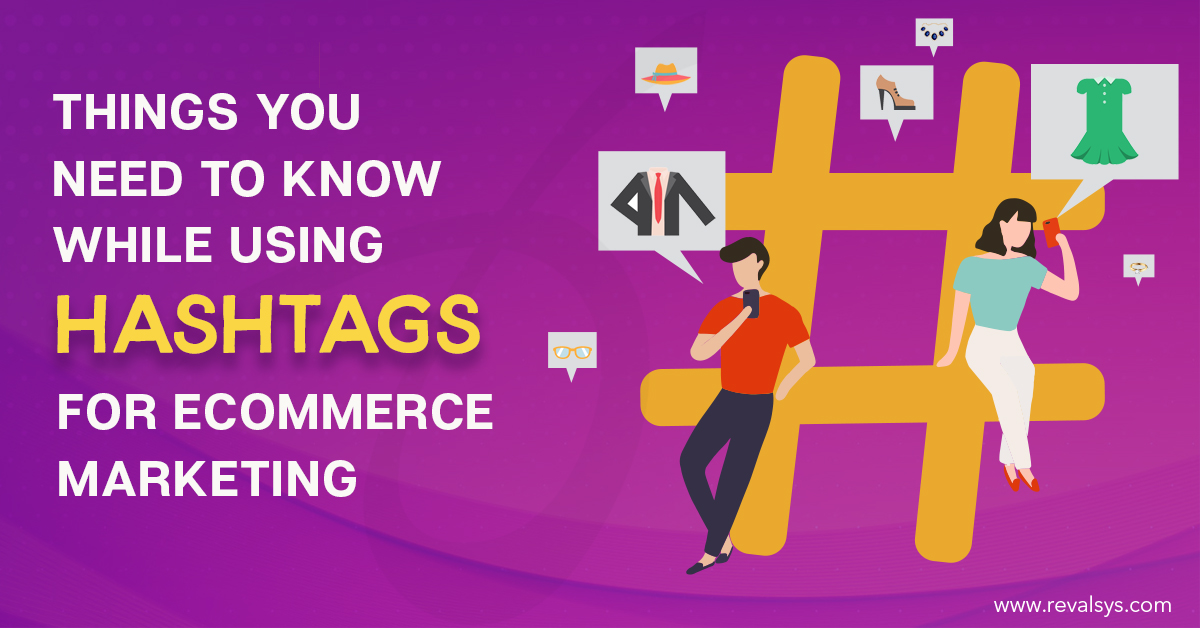 Hashtags include one or more words or phrases that are used on social media websites without any spaces, preceded by the pound/hash (#) symbol. They are used to have open group discussions, and also simplify the process of searching for accounts and posts. The hashtag symbol was introduced by Twitter in 2007, and today it is used on various other social media websites as well.

Different Types Of Hashtags That Can Be Used For Ecommerce Marketing

Trending hashtags are the ones that are the most popular and the most used at any given point of time. Because of their wide reach, these hashtags can be used to increase the visibility of your posts, and in turn, the number of your followers. Use hashtags that are the most relevant for your business and niche to ensure that your posts reach the right audience.

These hashtags are the ones that are related to your industry. They are a more precise way to reach the right target audience. Examples of these hashtags include #organicfood and #veganfashion. To improve the engagement of your posts, use the right balance of trending and niche hashtags.

A branded hashtag is a customized hashtag that you can create for your business to be used consistently on a long-term basis. It can contain your brand’s name and tagline. This hashtag can also be the names of your business’s campaigns, events, offers, products/services, etc., and can be used to promote and monitor their reach. This type of hashtag can give your business its own identity.

This lesser-known type of hashtags is the name of a particular area and is followed by the area’s residents. The hashtag of your business’s location can be used to draw the focus of an audience that is more local and relevant to you.

Don’t Use The Same Set Of Hashtags For Every Post

While it is important to use relevant hashtags in your posts, you must make sure to not use the same ones in all your posts. Keep changing up the hashtags, and use those that are relevant to each post to increase their visibility.

This is important to remember while using Instagram. Instagram’s guidelines prevent its users from using inappropriate words like swear words in their hashtags. Using such hashtags can result in accounts getting permanently banned from using the website.

Don’t Use Too Many Hashtags

The average social media attention span of people is eight seconds. This leaves you with very little time to make people stop and take notice of your posts. Avoid using long hashtags as it may put people off your posts.

Make Them Easy To Spell

Your hashtags will be memorable and used widely when they are easy to say and write. In addition to keeping them short, use simpler spellings and avoid unique ones.

Make sure that your captions and hashtags get equal attention. Post your hashtags in the first comment of your posts so that they don’t get hidden and the posts don’t look crowded.